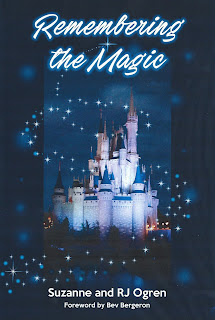 Five months ago, I posted my last blog. Since that time, I have been non-stop busy, completing "Remembering the Magic", co-written with my husband, RJ (cover displayed here). It is the sequel to our first book together, about our careers at Walt Disney World in the early decades. It was released the first week of January, and we are thrilled with the positive responses and reviews we're receiving. We are promoting it on social media, and lining up book signings and speaking engagements.

In addition, I have been co-director, with my talented son, on two theatrical productions. The first was an abbreviated version of Shakespeare's "Twelfth Night", which was performed in September. The second play, "The Elephant Man", is halfway through a successful run. Both required many, many hours but we've been rewarded with two talented casts that make all that time definitely worth expending.

Naturally, the "real world" has intervened several times; the Holiday season, of course, but there were also some family issues that required my attention, including my husband's brief stint in the hospital (he's fine now).

If this all appears to be excuses for going so long without blogging, then let it be. I thought you deserved to know why I have been off the grid for so long.

I will be resuming more regular postings, at least one a month, and you can also go to the combined website RJ and I have (rjogren.com) to see images and posts of what keeps us creatively busy.

Our newest challenge, referred to in this blog title, is one without a name yet. We are quite excited that we have the green light to do a series of books about the history of Walt Disney World, from a unique perspective. That's all the detail I can give you right now, but we will begin research in about two weeks for the first volume.

Keep checking back as we get underway. This venture will be ongoing for quite some time, and promises to give me lots of blog subjects, in addition to many others I've had on my mind for awhile now.
Posted by Suzanne Rowe Ogren at 2:09 PM 1 comment: Links to this post

Suzanne Rowe Ogren
Been writing ever since I learned to read at age four. A former writer of magazine and newspaper articles (focusing on personality profiles and travel), I presently have four published books available. The first is "Chicken Soup for the Soul: The Gift of Christmas", in which my story, "Our Spirit of Christmas", appears. Released in 2010, it is available through the Chicken Soup website, as well as select bookstores. The second published work (2015), co-authored with my husband, R.J., describes our unique careers in the early decades of Walt Disney World. It is entitled "Together in the Dream", available through themeparkpress.com. My first novel, "Ribbons" was published in May 2016. With my husband, we wrote a sequel to "Together in the Dream", titled, "Remembering the Magic", published in January of 2017. My "second career" as an actress and theatre director for much of my life, affords me many avenues for stories, blogs and plot lines. You can discover more about this on our combined website: www.rjogren.com.